This clip was filmed on May 31, 2012, at Je’Bon in New York City. My performance was part of a gala show happening in conjunction with workshops taught by Leila Molaei. Thanks to host Mark Balahadia.

Dancers interested in learning this choreography or style: I’ll be teaching the dance shown in the video above, along with general technique and other material, on June 23 and 24 in New York City.  Earlybird rate for dancers coming on both days available through this Sunday, June 10.  Link.  (More information about the video clip follows after the flyer below.  Keep scrolling....) 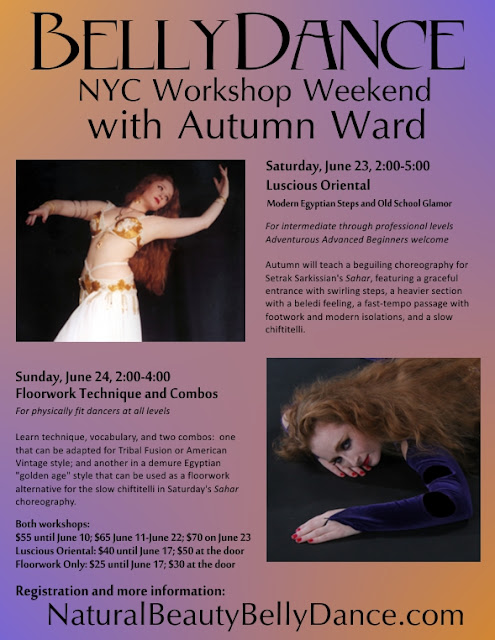 I’ve worked a lot on nontraditional projects for the past few years, many of which, because they have taken me into previously unexplored territory, have demanded enormous amounts of time and brainpower. This new Oriental choreography was created just for the fun of doing something sweet and romantic. After the painstaking work of trying to adapt belly dance movements to nontraditional music in nontraditional dances, it was a pleasure to choreograph with music naturally suited to my dance vocabulary.

Although this is a traditional piece, it, hopefully, has a unique flavor. At the risk of alienating colleagues, I have to admit that I’m not entirely a fan of a lot of contemporary traditional belly dance. While I’m happy to see how the technical level of our community continues to improve, I’m often disappointed by a lack of softness, warmth, and imagination. So, for this piece, rather than focusing on current trends, I put tight modern steps in a context of vintage glamor and lyrical styling, aiming to evoke the fairy tale Orient of the Arabian Nights.

Although I’m using a lot of Egyptian vocabulary, as always, there’s a mix of things, so this piece is best described as theatrical Oriental dance. I would not describe it as cabaret or nightclub style – it’s a fuzzy distinction, but in my opinion the choreography is too detailed and poetic to be appropriate for a boisterous venue. Because I know the provenance of vocabulary is a topic of interest to this readership; a blow-by-blow of highlights follows.

:11 Shoulder rolls: modeled after Nejla Ateş (seen, with Vincent Price, in the clip above) and Samia Gamal. My movement has a slightly different look, because I let the movement follow through into my elbows and wrists.

:20 “Lotus” hands: I don’t think I’ve ever seen an Egyptian dancer use this movement. It’s an import into contemporary belly dance from Indian dance.

:35 The pivot in this combination is led by the working hip’s arcing up, over, and back, while pulling the unweighted leg up and then dropping it into a turned-out position. This is a movement that I created and have never seen anyone else use. (It's also here at 3:00 and here at 2:47)

:36 The “tap” in this movement (following from an accent created by the lumbar spine’s releasing from a lengthened position back to neutral) is modern Egyptian. It’s used by several dancers, but I associate it with Mona Said and Raqia Hassan.

:52 After the turn upstage, there’s a series of accents on the downstage hip: front-back-in. The elbow lift that accompanies the “in” is not Egyptian – I don’t think I can claim credit for “inventing” an elbow lift, but this use of the arms is part of my personal style.

:53 Circle of the unweighted hip with the upper body counterbalancing backward: I consider this to be very much an Egyptian movement, although not one that’s particularly popular at the moment. I particularly associate this move with Soheir Zaki, but it was also used by earlier dancers in black-and-white ‘40s and ‘50s Egyptian films.

:55 3-part leg flourish: like the elbow lift, I don’t think I can claim to have invented this movement, but it’s not taken from anyone else’s vocabulary and doesn’t look to me like any particular style other than my own.

:58 Barrel turn: backbending vocabulary was certainly present in Egyptian dance as shown in ‘40s/’50s movies, and, in a new form, it seems to be creeping its way back in via Russian and Ukranian dancers, but this kind of backbending turn is far more Turkish or American Vintage than Egyptian.

:59 The accent/circle/pivot combo here is just something that I made up for this particular piece of music, but I feel very Egyptian doing it. Well, mostly Egyptian… The accent feels Egyptian; the acceleration in the circle feels like me.

1:21 – 1:35 I would characterize all the vocabulary here as Egyptian, although I think the density of melody-following detail in the choreography shows my imprint. Up to 1:28, the arm path (lift, cross behind the head, extend forward leading with the backs of the hands, push down behind the hips for the hip circle) as 100% mainstream modern Egyptian. The pull in/unfold in the transition to the undulations is a little less Egyptian, and a little more me—the difference is in the phrasing (there’s a little bit of a drag/acceleration), punctuation, and technique. I articulate more in the wrists and elbows than what’s typical of Egyptian style. After 1:30, the arms go back to Egyptian.

1:35 These double-drops are sandwiched between two gooey movements that create a lot of visual interest through the abdomen. So, for compositional purposes, to provide counterpoint, I went with a leg-driven (and, hence, non-Egyptian) double drop rather than a core-driven version. It’s also just a stylization that I like: leg-driven hipwork is one of the factors that contributes to the clean look of my dancing.

1:45 While step-lifts are common to essentially every style of belly dance, the arms, taken from the Reda-influenced theatrical folklore style, give this passage a distinctive Egyptian flavor.

2:07 – 2:40 This is another section of what I would consider to be purely Egyptian steps, but densely sequenced in a way that gives them my artistic signature. And the timing on the turns at 2:14 and 2:32 looks particularly “Autumn” to me.

2:40 – 3:38 (Floorwork) Since it was outlawed in Egypt in the 1950s, floorwork has been essentially absent in Egyptian dance. (An occasional exception is floorwork with a shamadan, a candelabrum balanced by a dancer leading a wedding procession, included to demonstrate balancing prowess.) My sequence combines a little of the flavor of floorwork from early Egyptian movies with shamadan vocabulary (like the hip bump at 3:11), rounded out with moves from contemporary and Vintage American nightclub styles. To me, the absence of more gymnastic movements imbues an Egyptian (rather than Turkish or American) aesthetic, but the dominant flavor I feel when dancing this section is just romantic theatrical fantasy.

3:46 A few years ago I would have associated this pose (arms overhead with interlocked hands) almost exclusively with vintage dancers and Turkish or Turkic influence. However, I’ve seen Egyptian dancer Randa Kamel use it several times recently, so I suppose this makes it both Egyptian and contemporary.

4:00 I often used a soft-kneed shimmy. This is not it. Here I’m using the straight-leg modern Egyptian version.

4:48 Here’s another backbend. Unlike the backbend in the unweighted hip circle at :53, the shape here comes from an arch in the spine rather than a bend in the knees, and my feet are relatively close together. I would not characterize this ending pose as either vintage or modern Egyptian – like the floorwork, I would just call it “theatrical.”

I made this costume in this video, layering embroidered and beaded eveningwear lace layered over satin. I've never seen another costume that used this construction method, which is a total mystery to me; I will definitely use this technique again. While there was still a great deal of handwork (I added the fringe and gems, and added a little more detail to the beading), using a pre-emebellished fabric gave me a much more luxurious effect than I could have achieved by hand. 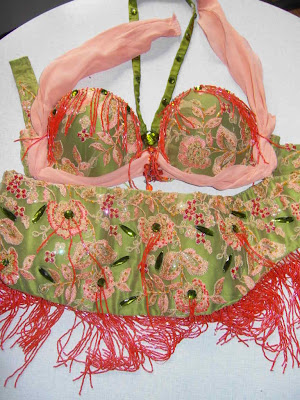 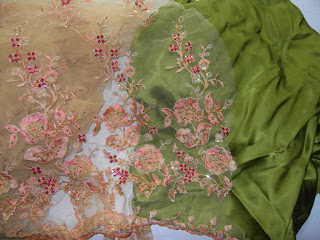 The design was not copied from any costume in particular, but I chose the centered halter strap, wider belt, and dual-slit chiffon circle skirt to give the the retro feel of vintage costuming. I think this bedleh is a little subtle compared with the high-end stretch lycra and rhinestone designs that are popular right now, but I feel classy and elegant in a costume that doesn't yell so loudly.

I'm not sure where I bought the fabric (which there's no more of anyway—I bought the end of the bolt), but it was purchased somewhere in the cluster of fabric stores in the high 30s between 7th and 8th avenues in New York City. Fringe and gems from Hai Trim, 242 W. 38th St., NYC. The center accent on the bra is an earring whose mate I have lost.

Through the end of the floorwork, I'm dancing to an outtake from the gloriously keyboard-free Sahar, by Setrak Sarkissian, available here. The drum solo is excerpted and edited out of the misleadingly named tracks “Saiidi Cane” and “Bindi Dance” from an Amazon mp3 collection called “Belly Dance Favorites” by the “Belly Dance Orchestra.” This is a collection of obviously re-released vinyl-era music with new and arbitrary names attached to the tracks. "Sword Dance," for instance, is "Sala Sala," from from Özel Turkbas' Alla Turca, but there are a lot I can't identify. If you know the original credit for the tracks I'm using in my drum solo, please let me know!

People, I hear you.  I know this is not the greatest.  My camera is pretty old, and I did a zoom/crop on the footage (the camera person was pretty far away from the stage and I'm very tiny on the original) which took the quality down even further.  I'm working on a hardware upgrade before my next upload.
Posted by Autumn Ward at 11:21 AM 3 comments: